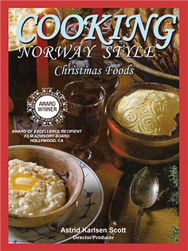 In this 55-minute video, Norwegian-American Astrid Karlsen Scott takes you to Norway to share her homeland's traditional Christmas foods. This video teaches you how to prepare many of the dishes Norwegians consider vital to their Christmas.