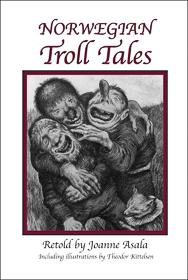 In the days now long departed, so far back that no one can quite say when, the trolls came to the land of Norway, and they have been trouble ever since!

This book features stories and poems by well-known Norwegian writers, including Peter Asbjornsen, Jorgen Moe, Henrik Ibsen, and Jonas Lie. Part II relates the adventures of trolls in the New World, with essays on Mount Horeb, Wisconsin, “The Troll Capital of the World,” and the troll carvings of Little Norway.

Artist Judith Simundson tells how to make your own troll figurine out of papier mache.

More than thirty Norwegian troll tales are retold by Joanne Asala. Includes lively illustrations by Theodor Kittelsen and others.