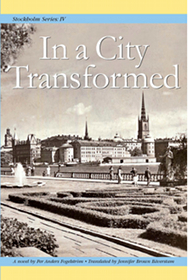 In a City Transformed, the fourth volume in Per Anders Fogelström’s five-novel Stockholm series, opens in 1928 on the eve of the Great Depression and continues through World War II.

Readers will once again meet well-loved characters, following them as they age and ponder their lives. Younger family members struggle through years of unemployment, fears of war, and personal dilemmas, at the same time Stockholm is transforming from a bucolic town into a major city and as Sweden itself takes on greater social responsibility for its citizens.

This novel, like the past three in the Stockholm Series, was translated by Jennifer Brown Bäverstam.

The first novel in the series, City of My Dreams, is being used in university courses on Scandinvaian life and history.

——- Review ——-
Hi, Just received “Stockholm Series IV: In a City Transformed” in the mail today. Thanks so much for printing the series. Please send along my thanks to Ms. Baverstam for her fine transalation. Looking forward to the 5th volume! Again, Tack sä mycket!