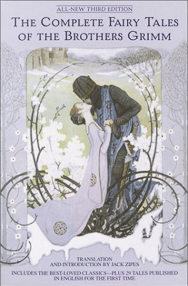 The Complete Fairy Tales of the Brothers Grimm

Perhaps no stories possess as much power to enchant, delight, and surprise as those penned by the immortal Brothers Grimm.

In this new, expanded third edition, renowned scholar and folklorist Jack Zipes has translated all two hundred and fifty tales collected and published by Jacob and Wilhelm Grimm, plus twenty-nine rare tales omitted from the original German edition, as well as narratives uncovered in the brothers’ letters and papers.

The volume recaptures the fairy tales as the Brothers Grimm intended them to be: rich, stark, spiced with humor and violence, resonant with folklore and song.

Jack Zipes is a professor of German at the University of Minnesota and is the author of numerous books on folklore and fairy tales.