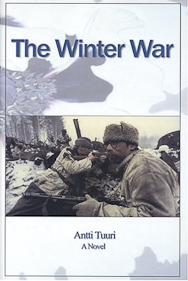 This novel is a tribute to the Finnish soldiers of the Winter War, the 105-day war that followed Russia’s invasion of Finland in November 1939.

Events are seen through the eyes of Martti Hakala, now an old man, who had been a rank-and-file soldier of the 23rd Infantry regiment, a unit drawn mainly from the province of Ostrobothnia. The book depicts what happens to ordinary men under prolonged exposure to violent death and destruction.