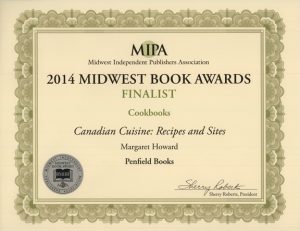 Canadian Cuisine: Recipes and Sites has placed as a finalist in the 25th Midwest Book Awards through Midwest Independent Publishing Association. http://www.mipa.org/midwest-book-awards/25th-annual-book-awards-finalists

Congratulations Margaret Howard on your award. Margaret is a Canadian home economist and former dietitian. She has written this ethnic cookbook Canadian Cuisine: Recipes and Sites featuring ninety-five well-tested recipes accompanied by photos, illustrations, and regional information about Canada.

Originally, Canada was a bilingual country made up of French and English people, however, today they are enriched by many ethnic groups making a blended population. Because of this wide diversity of more recent ethnicities, she has added a variety of recipes representing a diverse and exciting cuisine.

We are pleased to include recipes of French, Scottish, English, Irish, German, Italian, Hungarian, Scandinavian, Greek, Eastern Slavik (Ukrainian, Polish, and Russian), Caribbean, and Mediterranean (Portuguese and Spanish) origin. These cultures have added greatly to the Canadian culinary scene. Also, we have included recipes consisting of Canada’s agriculture and First Nation’s population such as: wild rice, venison, bison, wild geese and other birds, and berries as well as recipes that include wonderful freshly caught fish.

In 2006, she won the OHEIB (Ontario Home Economist in Business) Hall of Fame Award and she is an author of numerous cookbooks. During her business career, she was Consumer Services Manager at Thomas J. Lipton in their Canadian offices in Toronto. This included managing the test kitchen, responsibility for all packaging directions, presenting, and attending cooking schools in Mexico, U.S.A., and Canada.

Margaret is also very involved in her local community and heads up the volunteers for the Hospice Association. She is a member of Ontario Home Economics Association. Her cookbooks promote healthy eating. Married for over 53 years, she has four children and nine grandchildren.
——————————————–
Nova Scotia Seafood Chowder