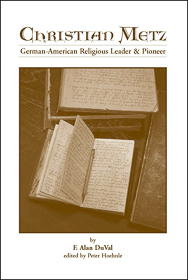 Considered an inspired instrument of God by his followers, Christian Metz organized the scattered elements of a dying eighteen century sect, led the relocation of 800 of the faithful to a new home in New York state in 1842-44 and finally to Iowa in 1855.

Under Metz’s leadership, the Inspirationalists established a communal system that endured, largely unchanged for nearly ninety years and proved to be one of the most successful and longest lived of the more than 250 attempts at communal living undertaken in the United States during the nineteenth century.

The community that Metz established reorganized in 1932 into separate religious and business institutions which, nearly a century and a half after his death, remain vital presences in the Amana Colonies and larger eastern Iowa communities. The members of the Amana Church Society continue to sing many of the hymns and read from more than 3,000 testimonies that Metz delivered over a period of nearly fifty years of leadership.