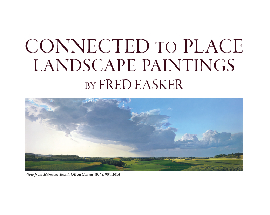 Fred Easker’s landscape paintings offer an extraordinary view into what is too often considered ordinary. Most often drawing on familiar sites in the backroads of his native Eastern Iowa, he celebrates both the aesthetics and the character of place and offers a keen meditation on the power, vulnerability, and eloquence of land and our relationship to it.

Easker paints from photographs he takes on “discovery” drives, but his finished images are more than painted photographs. The artist points to what has occurred as the image has evolved and the contemplation has developed; a transformation has taken place that distinguishes the painting from both the site and the photograph. The final images are meticulous in their detail, but more painterly than they appear at first glance; more important, they have a new identity. The canvases are unique constructed visions, not merely translations of objective reality.

Easker’s spring views are especially stunning, but his scenes of other seasons are equally compelling.

Easker’s book is in landscape page format of 11 inches wide by 8 1/2 inches tall to give the reader/viewer the largest view. Some photos spread across both pages giving a fantastic full view of Fred’s work.

His paintings are included in museum, corporate, and private collections throughout the Midwest and have appeared in a number of periodicals and books. He was featured on Iowa Public Television and more recently completed a commissioned painting for the General Services Administration in the United States Federal Courthouse in Cedar Rapids, Iowa. Over the span of his career, he has worked with private galleries in New York, Milwaukee, Minneapolis, Tulsa, Des Moines, and Cedar Rapids. The artist holds a BA and MA in Art Education from the University of Iowa.