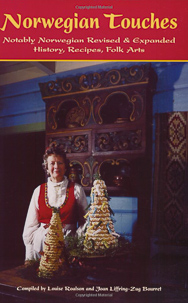 Norwegian Touches is beautifully designed and illustrated with about eighty photographs, half of them in full color.