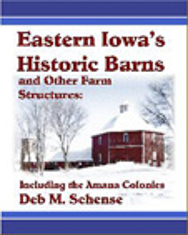 Eastern Iowa’s Historic Barns and Other Farm Structures: Including the Amana Colonies (Color)

Originally there were approximately 200,000 barns built in Iowa. Now it is estimated that only 60,000 barns remain, with another 1,000 or more barns disappearing from Iowa’s landscape annually. This book preserves in print Eastern Iowa’s historic barns built from 1839 to 1955 with over 175 photographs from the author’s research, the first ever Amana Colonies barn tour, the Johnson County Historical Society barn tour, and the Iowa Barn Foundations annual barn tour. Eight Iowa counties and 20 rural cities are covered. Former president Hoover was living as a youth five miles from one of the featured octagonal barns when it was built in 1883. This barns aesthetic beauty is so inspiring that people from other countries come to visit this barn each year to see the unusual bell shaped roof, a suspended staircase, a railway car, and laminated interior ribs. It may be the only barn built with a bell shaped roof and is thought to be the oldest surviving barn built of its kind in the U.S.
Color format.
Written and photographed by Deb Schense.