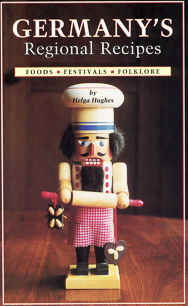 Helga Hughes and her late husband, Ken, visited Germany repeatedly to collect these recipes and festival traditions from the sixteen provinces of the new Germany.

Recipes include Black Forest Cherry Cake from Baden-Wurttenberg in the upper Rhine Valley; cooking with beer in Bavaria; Berlin Frikadellen, an early version of the American hamburger; the spicy tastes of Brandenburg; seafood of Bremen and Hamburg; and a continuing list of flavors and tastes of the other regions.

A special section includes traditions and foods associated with holidays and national celebrations. Karin Gottier, German folklorist, details a traditional Christmas in Germany and the origin of many customs now celebrated worldwide.