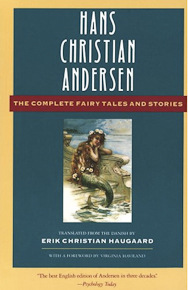 Presents 156 tales accompanied by the author’s notes on the background of his stories.
Hans Christian Andersen is one of the immortals of world literature. The fairy tales he wrote, such as “The Snow Queen,” “The Ugly Duckling,” “The Red Shoes,” and “The Nightingale,” are remarkable for their sense of fantasy, power of description, and acute sensitivity, and they are like no others written before or since. Unlike the Brothers Grimm, who collected and retold folklore, Andersen adopted the most ancient literary forms of the fairy tale and the folktale distilled them into a genre that was uniquely his own.

In preparing this first English translation of the complete fairy tales and stories as collected and told by Andersen, Erik Haugaard has scrupulously followed the text and the order of the stories in the original Danish edition of 1874. Recognizing the literary merit of Andersen’s own simple colloquial language, which Victorian translators and their imitators very often altered to sentimentalize or vulgarize, Haugaard has remained faithful to the original text. This edition included Andersen’s own notes to his stories.

As Virginia Haviland comments in her Foreword, “This new work, in its fresh and authentic transmission, and with Andersen’s notes accompanying the translation, is offered as a contribution to the history of a literature that belongs to every age.”

Translated from the Danish by Erik Christian Haugaard.
“The best English edition of Andersen in three decades. Haugaard is the perfect translator for an American audience. He faithfully renders the tales into an idiomatic English that makes them as fresh and lively as they must have been to the Danes who first heard them.” Psychology Today   pages