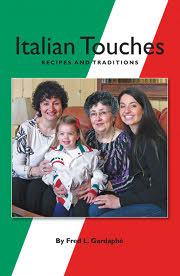 Between 1870 and 1924, twelve million Italians left their native land. Nearly half of them came to America, seeking a new life that would be better than the grinding poverty of southern Italy. Now almost sixteen million Americans claim Italian descent with the third, fourth, and fifth generations of Italian Americans retaining many of the values and the charm of their grandparents and great-grandparents. Theirs is a noble heritage. In terms of history, art, architecture, literature, and triumphs of the human soul, the Italian experience has been an inspiration to the western world. Italian Touches covers the Italian greats in history, religion, writers, literature, Italian American Organizations, the arts, architecture, dancing, film, theater, and more. Essays by Gardaphé include poignant writing about his Italian mother and father. Gardaphé is a distinguished professor of literature in New York.

Fred Gardaphé describes the rich family traditions and celebrations in such great detail you can almost smell the sauce steam rising from the page. One such family gathering, his Uncle plucked a meatball with his thumb and forefinger from Grandma’s cooking pot in the kitchen. He walked back to the living room devouring the meatball with a sauce stained white shirt. When Fred tried the same, his Grandma emerged from the pantry and bounced a colander against his head and spouted, “Don’t be a porco. We gonna eat now. The pasta she ready.”