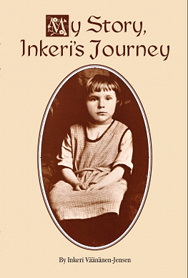 This book could be any ethnicity’s story of coming to America. The book talked about in the 1920s and 1930s when cars became available, the trials of learning how to drive. The windshield wiper, located on the driver’s side, was operated by hand usually by the person sitting beside the driver. If at all possible, driving in the rain was avoided and so was driving in the winter time because there were not heaters nor was there any antifreeze so radiators and batteries could freeze. The fastest automobile speed within their comprehension was sixty miles per hour. If a speeding car whizzed by someone was bound to exclaim, “He must be going sixty per!”

In 1927, Otto was forty-four years old when he learned to drive, and for a long time he remained an excited, erratic driver, sometimes knocking the side of the garage upon entering, sometimes hitting the tree across the street as he backed out of the garage too fast, and occasionally losing some control on sharp curves on the gravel roads we traveled outside of town.

Inkeri also talked of tuition when she attended a junior college. It was $5 a semester and $10 a whole year with some lab expenses plus books.
She also tells of what it was like to live through the Depression era and World War II.

This is a fantastic historical ethnic book that tells you what it was like to live at the beginning of the 1900s as a first generation immigrant.