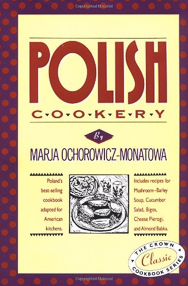 Here are the dishes your mother used to make, from the cookbook your grandmother brought over from the old country.

Polish Cookery is an American adaptation of Uniwersalna Ksiazka Kucharska (The Universal Cookbook), the standard cookbook in Poland. All weights and measures have been converted to American usage, and suitable substitutions are provided for hard-to-get ingredients.

The recipes range from the familiar to the exotic and include soups like Polish Mushroom and Barley Soup, Fresh Cabbage Soup, many variations of Barszcz, the famous Polish beet soup, and Sorrel Soup with Sour Cream.

To round out the Polish meal, there are recipes for Mashed Turnips and Potatoes, Split Pea Fritters, Stuffed Kohlrabi, Fried Carrots, Mushroom Ramekins, Pearl Barley with Dried Mushrooms, and desserts such as Almond Torte, Cracow Torte, Spice Cake, and Almond Babka.