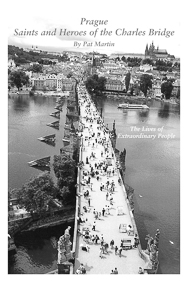 Prague: Saints and Heroes of the Charles Bridge: The Lives of Extraordinary People

The thirty-seven Saints of the Charles Bridge in Prague, representing twelve countries and spanning sixteen centuries, are depicted on thirty statues.

Middle European history was influenced by these men and women, who were much more than saintly. The Saints of the Charles Bridge were governed by the needs of others. They were confessors to kings, leaders in the Crusades, inventors of languages, defenders of their faith, and ordinary people who made extraordinary decisions and became heroes and heroines for mankind.

These superheroes with human faces and human miseries suffered failures, as do many of us. People may disagree with them, but it is the “human” nature of saints that attracts us to them.

In reading the lives of saints celebrated on the Charles Bridge, we relive history in middle Europe, and the goodness and power of noble humanity. This beautifully illustrated book has been in production more than eight years and is sure to please.