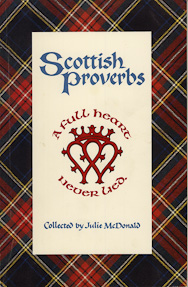 Julie Jensen McDonald began collecting these bits of Scottish folk wisdom while researching her novel, The Heather and the Rose.

The proverbs are reproduced in hand calligraphy adapted to the styles of the seventh-century Insular Half-Unicals and tenth-century Anglo-Saxon Miniscule, both from the manuscript The Lindisfarne Gospels.

Printed single-sided, each page is a work of art worthy of framing. Illustrations include the Scottish Lion, a celtic cross from Iona, a fictional clan badge from the family of Nessie, the Loch Ness monster, and on the cover, a Luckenbooth pin designed to win the heart of Mary Queen of Scots. The cover plaid is Black Stewart.

Julie Jensen McDonald, related by marriage to the great Clan Donald, is the author of more than a dozen published books.