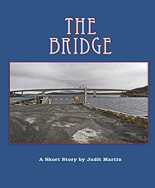 This touching story was inspired by author Judit Martin’s first drive up the Norwegian coast in 1965 and the changes she witnessed when taking the same route forty years later.

Until recent years, ferries transported people across the numerous fjords along the rugged coast of Norway. Today, tunnels and gracefully arched bridges have replaced the ferries.

This story tells of Enok, a ferry operator whose family had been in this trade for generations, and Odd, a young boy Enok adopts to save him from an abusive father. Enok teaches Odd all that he knows about being a ferryman, and the two develop a close, father-son relationship. As the ferries are replaced by bridges, Enok feels his livelihood has been taken from him.

Martin, originally from the American Midwest, has been living in rural Sweden since 1969. She has published several short stories in Scottish literary magazines, two books in Swedish, and one novel, Augusta’s Daughter, and a short-story collection in English, all available at Penfield Books.