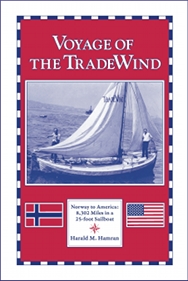 Voyage of the TradeWind

Voyage of the TradeWind
Norway to America:
8,302 Miles in a 25-foot Sailboat
By Harald M. Hamran from Norway

Harald says, “Our chances are slim, but no matter. It’s great to take chances when all things are against one.” These words were written in 1933 by Harald Hamran, who with his brother Hans was fighting in a deadly storm in the Bay of Biscay on their way from Norway to America in a 25-foot sailing vessel. Never before had anyone sought to cross the Atlantic in a boat that small. As navigational aids, the brothers had only a compass, charts, and the North Star. In this book Harald Hamran tells the story of the voyage in his own words, handwritten daily in English as his logbook and diary of the voyage.

The good…
“How many tied-up slaves, rich and poor, would not envy us our live now?”

And the bad…
“It hurts…especially when admiring the silvery moon, and thinking of a dream girl ashore, to be rudely awakened by a flying fish in the eye.”

When near Buffalo, New York, they listened to conversations among the groups on the bridges they passed under:
1. “Across in that thing? Well, I’ll be damned.”
2. “You sure must have courage.”
3. “You must have pluck. We wish you all kinds of luck.”
4. “Is that the boat that came from Norway?”
5. “I wish I was a boy” (man)—from a group of women.

The sea life, the people—especially the women, and the storms that they encountered on this journey are amazing. They make you feel as though you are the third passenger on the sailboat. They continued on to Chicago, Illinois, to attend the 1933 World’s Fair.

The sailboat resides at Vesterheim The Norwegian-American Museum in Decorah, Iowa.