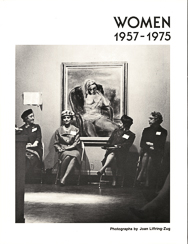 This book, originally published in 1981 and now in its second printing, provides a look at the roles women traditionally filled in the decades immediately after World War II.

Photographer Joan Liffring-Zug points out, “In the years these images were taken, very few middle-class women worked outside of their homes. The roles then assigned to women separated them from business, from politics, and from each other.”

Many of the black-and-white images offer gentle satire, such as the disapproving looks members of the Coe College Faculty Wives’ Club give a semi-nude painting.

“During the years that I took these photographs, I did not realize how they documented the limited roles of women in that era. I wanted to explore their lives to see why my own life seemed so alienated and different from theirs in so many instances,” Liffring-Zug says. “With the birth of the women’s movement in the 1960s, these photographs ultimately defined some of the social conditions of this era.”

The photographs have been exhibited at the New York City Camera Club and in many galleries. Two of them–
Nan Wood Graham, Model for American Gothic (1975) and Junior League Christmas Party (1962)–are part of the Metropolitan Museum of Art photography collection in New York City.