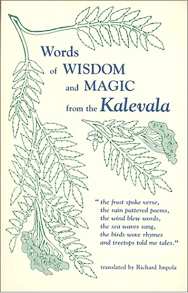 Words of Wisdom and Magic from the Kalevala

Written by Richard A. Impola

Translated and compiled by Richard Impola. Illustrations by Diane Heusinkveld

The Kalevala is a compilation from the oral poetry of the Finns, written down and shaped into an epic poem by Dr. Elias Lonnrot. This book of selections suggests the richness of the entire work.

The Kalevala’s subject matter, accumulated over many centuries, includes everything from tales of mythical figures with superhuman powers to touchingly human stories. It played an important role in developing a sense of identity among Finns and in the eventual emergence of Finland as a nation.